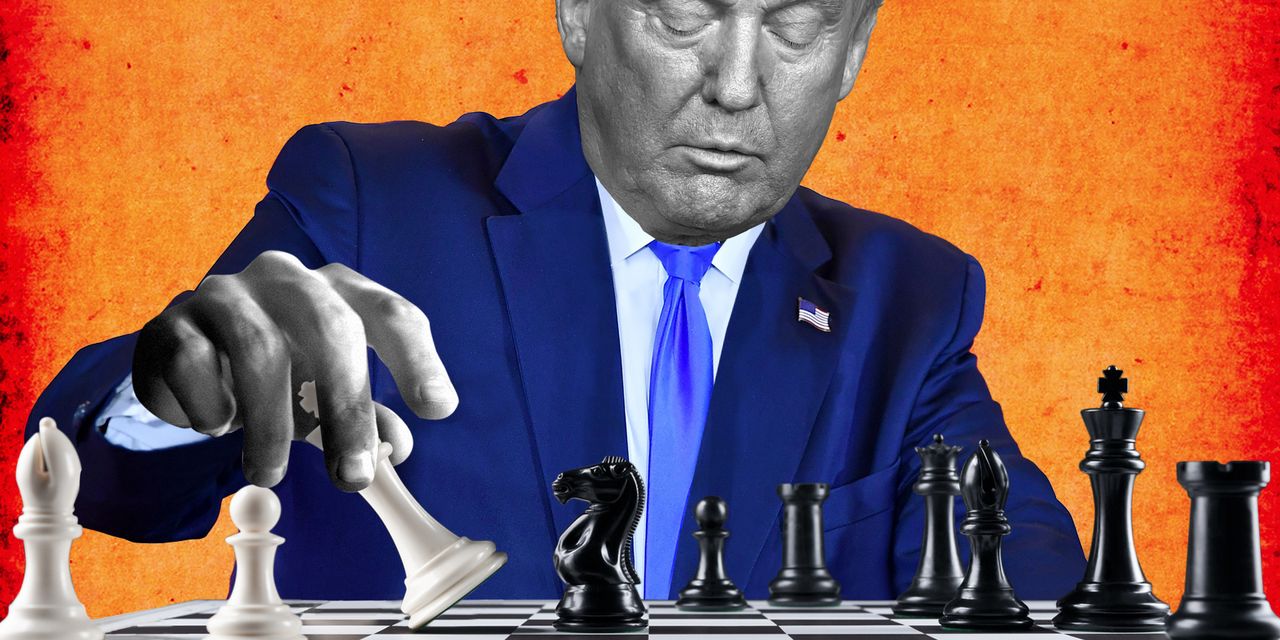 George Washington could have run for reelection until he died, but had he stayed put for a third term the country probably wouldn’t have seen its third century — nor would Lin-Manuel Miranda have written a song about it. This peaceful transfer of power was and is the radical idea at the heart of American democracy.

That doesn’t mean it’s easy. Losing money is more painful to us than gaining it is pleasurable, behavioral economists have shown. This loss aversion may be doubly true when it comes to power.

President Donald Trump seems to be running out of moves on the electoral game board, but so far he has shown no inclination to give up. To make sense of the guy from Queens’ gambit, MarketWatch sought the advice of experts in the art and science of throwing in the towel: a chess master, boxing coach, poker player, and the U.S. Monopoly champion.

Presidential politics is not a game, of course, but sports and competition can provide insight into the when and how of conceding defeat.

Chess is one of the few games in which conceding defeat is an important move; a player may announce their intention to resign, or merely topple over their king.

“Top players resign because they have been beaten, outwitted,” Pandolfini, 73, told MarketWatch.

“You don’t keep fighting when your situation is hopeless, and you have far less than a 1% chance of overturning things. It’s kind of an insult to the game not to resign.”

This often happens many moves before the end, when the checkmate is still in the mail.

“
‘Well, there are people you just don’t even want to play because they are such unpleasant losers.’
”

“When I was young I was playing a grandmaster and I continued in a position well after I knew I had lost — I eventually did lose,” Pandolfini said. “The grandmaster said to me, ‘didn’t you see that?”’ I was a bit of a wise guy kid, though, and said, ‘I wanted to see if you had seen it.’”

An unwillingness to resign is more common among young players, said Pandolfini, who has coached his share.

“You wouldn’t want to have a youngster give up so easily. That would signify a lack of fighting spirit,” he said. “You don’t want to see a weakening of that resolve. Most youngsters do continue beyond the points they would resign as older, more mature players.”

What possesses a player to stay in when the situation is hopeless?

“Well, there are people you just don’t even want to play because they are such unpleasant losers,” Pandolfini said. “Even in the world of serious chess. But most serious players do accept the conditions of professional play and resign in some acceptable manner.”

Playing Monopoly until the bitter end is more than most people can handle, with the exception perhaps of 12-year-old slumlords who, like pint-sized Mr. Potters, savor every moment of impoverishing their parents and siblings.

“You know you’ve lost when you see the pitfalls of other players’ houses and hotels are outweighing your cash on hand and the odds of evading them with the dice,” said U.S. Monopoly champ Brian Valentine, who may be the only person in America who has done more buying, selling and mortgaging of Atlantic City real estate than Trump.

“In a family game, this is when it’s time to fold,” he said. (Though others prefer to flip over the board, send dogs, hats, railroads and cash flying, in a dramatic rage-quit.)

But conceding defeat is not really an option in tournament play, Valentine said. “You have to play to the end, because there is an actual time limit.”

When the game seems hopeless, sometimes players get a hot hand with the dice, Valentine says. “I have seen people kangaroo hopping all over the board, but this is not just a game of luck — and very rarely does the evasion of having to pay a lot of money also correspond with you being able to gain money and build up simultaneously.”

“
Trump ‘just landed on Chance in the late stages of the game, knowing the only card left in the deck is “Advance to Boardwalk.” And Boardwalk has a hotel on it.’
”

Top players know the odds, they know which Chance or Community Chest cards are still in the deck, and whether their only hope is beating the clock, Valentine said. “I guess the analogue in the present is whether in December when the electors vote or by January when there is an  inauguration, eventually you are going to run up against the time limit.”

There are some players who get erratic and unsportsmanlike in such situations, proposing absurdly lopsided deals as if they aren’t in a hopeless situation.

“At the highest levels though, there is a certain level of honor and dignity,” he said. “You have to respect the rules of the game, which have been in place for 86 years.”

As for what Trump’s Monopoly board looks like at the moment, Valentine considered a few scenarios before settling on:

“He’s just landed on Chance in the late stages of the game, knowing the only card left in the deck is ‘Advance to Boardwalk,’” he said. “And Boardwalk has a hotel on it.”

Poker at its core is a math game. Based on their cards, players calculate what percentage chance they have to win while weighing other factors like what cards may come next or what cards their opponents may have.

But poker is an emotional game too, and reading situations based on the temperature of the room is essential.

“There is a fair amount that’s math,” Conniff, 32, told MarketWatch. “But some of it is just reading people.”

“
‘Trump has nothing to lose. The party may have something to lose, and even that’s debatable. It’s what we call a free roll. He might as well try to win and if he loses he just kind of goes home. He’s not betting anything.’
”

Conniff, who has been playing poker professionally for the past eight years, says knowing when to get out can sometimes be the best skill a player could have.

“One of the truest sayings in poker is ‘if you can’t spot the fish, you’re the fish.’”

A poker player deemed a “fish” is somebody who is not a seasoned player and who will likely lose when the game is over.

So is Trump a fish in the 2020 election poker game? Not exactly, according to Conniff.

“One of the great differences here is that he has nothing to lose. The party may have something to lose, and even that’s debatable. It’s what we call a free roll,” Conniff explained. “He might as well try to win and if he loses he just kind of goes home. He’s not betting anything.”

Boxing is one of the few major sports where the participants have an opportunity to end the match prematurely. Knowing when a fighter has taken enough of a beating, or when he or she has no opportunity to win is something that is a top concern for boxing coaches.

“Sometimes my boxer gets pissed at me, and sometimes they understand, O’Leary, 48, told MarketWatch. “But either way my job is to make sure they come out of there safe.”

If he knows his fighter is taking a beating and can no longer win the fight, O’Leary will not hesitate to make a move.

“I will always stop a fight if I feel like my boxer is not in it.”

Assessing whether a fighter still has a chance can be difficult. One reason for that is what O’Leary calls the “puncher’s chance.”

“I had a guy, he was outboxed in the first two rounds, completely outclassed, but the kid he was fighting had no punch at all, he wasn’t hurting my guy. My guy was getting outboxed, and I was pretty sure he was going to continue to get outboxed. But my guy was a hard puncher, so he had a puncher’s chance. If he landed the right punch at the right time, he probably could have taken out this prospect. We lost practically every round, but he was in the fight the whole time.”

When asked whether or not Trump still has a puncher’s chance in the 2020 election fight, O’Leary said: “Do I think he can pull this out? There’s no way at this point. It’s time for him to just throw in the towel; he doesn’t have a puncher’s chance. He’s defeated now.”