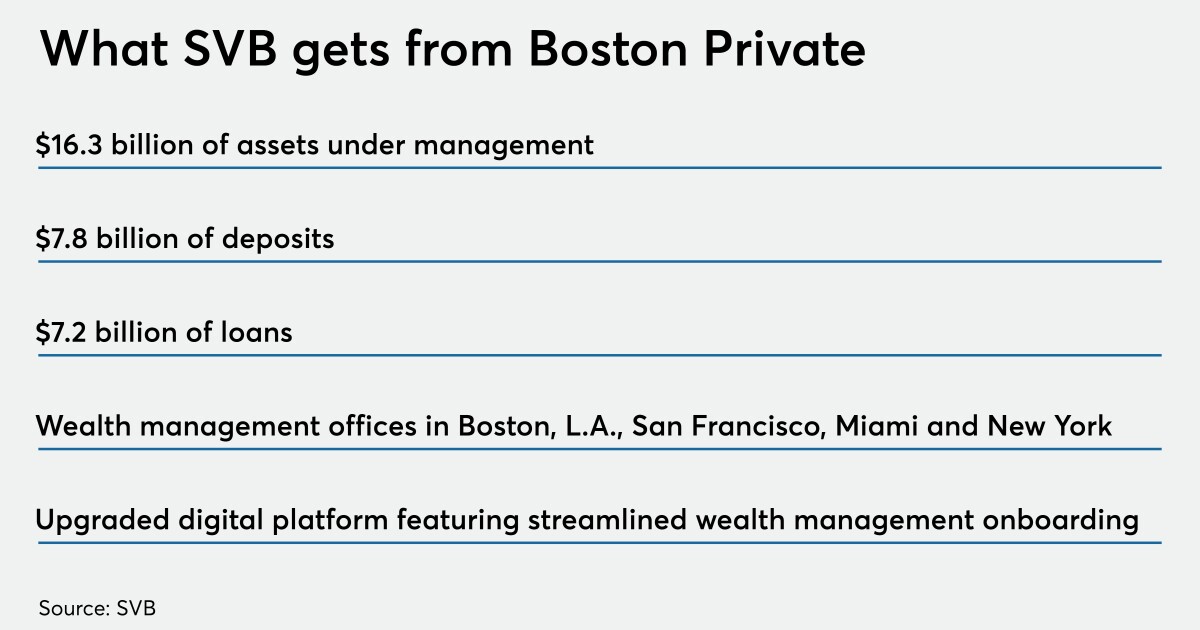 SVB Financial Group’s pending purchase of Boston Private Financial Holdings is expected to put the Santa Clara, Calif., company years ahead of schedule in its quest to be a leading provider of wealth management services.

The $97 billion-asset SVB agreed on Monday to pay $900 million for the $9.7 billion-asset Boston Private Financial Holdings in a deal expected to close by midyear. SVB plans to use Boston Private’s digital platform to build out its private banking operations in the Silicon Valley and other booming technology hubs.

SVB decided to buy an existing platform rather than build one because it saw an affordable opportunity to gain an established operation and a national team of advisers, which should help it grow faster. The deal comes less than two years after SVB bought Leerink Partners, a Boston-based investment bank.

“It was more about time than cost,” Greg Becker, SVB’s president and chief exeutive, said in an interview Tuesday. The bank would have “definitely needed a few years” to develop its out platform.

Saving time was important for SVB, the parent of Silicon Valley Bank, as it looked to court clients tied to the technology, health and life sciences sectors — areas that have largely thrived during the coronavirus pandemic.

As more people adopt mobile and remote technologies to bank and shop, the companies creating those products have “dramatically accelerated” their revenue generation, Becker said.

The trend should continue, creating an opportunity for SVB to pursue $630 billion in wealth management assets, including $250 million among its existing commercial customers, in coming years.

“That’s our customer base,” Becker said.

“Our clients are definitely feeling good about the how rapidly technology is being adopted,” he added. “There’s so much wealth that’s been created [by the innovation economy]. … It’s a huge market and it’s growing at a very rapid pace.”

The deal will give SVB an immediate lift — assets under management in its private bank would swell from $1.4 billion to about $17.7 billion when the deal closes. SVB also plans to adopt Boston Private’s digital platform, which includes a polished interface and streamlined processes in areas such as onboarding.

SVB will also gain a senior leadership team it views as adept at recruiting talent.

While a unique deal, given SVB’s focus on tech startups and venture capital, industry observers said other banks likely will face similar decisions on buying platforms or building them from scratch. Persistently low interest rates and a need to diversity revenue will only make those decisions more pressing.

“It was clear that SVB sees this as a strategic purchase to get them deeper — and relatively quickly — into wealth management at a modest premium,” said Chris Marinac, an analyst at Janney Montgomery Scott.

SVB “has a strong currency that makes the buy-versus-build decision a lot easier to answer,” said Gary Tenner, an analyst at D.A. Davidson.

Becker said discussions between SVB and Boston Private began in early 2020 and accelerated later in the year.

SVB would also pick up $7.2 billion in loans and $7.8 billion in deposits. Roughly 18% of Boston Private’s loans are in areas such as hospitality and retail that have proved vulnerable to the pandemic, but SVB noted that those loans will make up a small fraction of its portfolio.

As the economy recovers, there may even be new opportunities in those sectors, Becker said.

Still, industry observers noted that Boston Private’s balance sheet is taking a backseat to what it offers SVB in private banking.

“This deal is really about getting them a big head start” in building up a team of advisers and gaining an established onboarding tech platform, said Piper Sandler analyst Alex Twerdahl. And Boston Private’s advisers will have an opportunity to promote services to the much larger SVB client base.