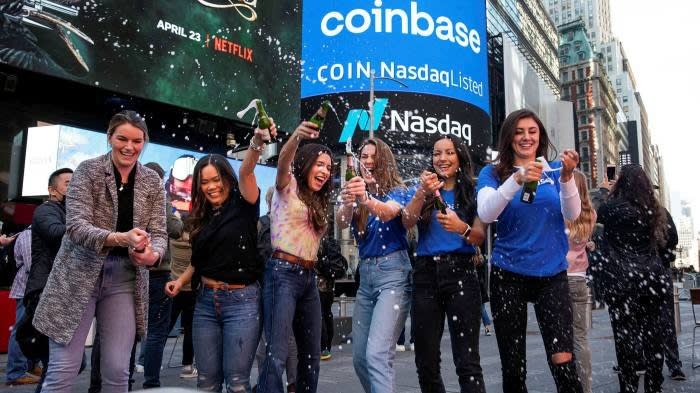 Stock market investors valued Coinbase at $75.9bn in its debut on Nasdaq on Wednesday, the first listing of a leading cryptocurrency exchange and a moment of validation for the digital asset class some 12 years after the creation of bitcoin.

Shares opened at $381 each on Wednesday, giving Coinbase a market capitalisation that immediately surpassed that of the New York Stock Exchange’s parent company, ICE, which is worth $67bn. Coinbase would be valued at $99.6bn when including options and other kinds of stock-based awards.

Coinbase holds assets for 56m retail customers and operates the largest digital coin exchange in the US — a business that has rocketed in recent months along with the price of bitcoin and other cryptocurrencies.

“What we hope is it just brings a lot more transparency to this industry and a lot more focus,” said Alesia Haas, chief financial officer of Coinbase. “We’ve seen that with the attention that Coinbase has received during the past few months.” (FT)

Covid vaccines show government can be a force for good, writes Gillian Tett. Follow our live blog for the latest Covid-19 news. Sign up to our Coronavirus Business Update email newsletter delivered three times a week.

Beijing hints at truce in war on Jack Ma’s business empire China’s central bank this week outlined the terms of a “rectification” of the fintech’s operations. The plan will have big repercussions for both Alipay, China’s most popular online payments app, and Ant’s huge consumer lending business.

Ponzi mastermind Bernard Madoff dies aged 82 Bernard Madoff, the investment manager who orchestrated the largest Ponzi scheme in history, has died, according to US media reports. Madoff, 82, passed away at a federal prison in North Carolina, where he was serving a 150-year sentence after pleading guilty in 2009. In 2011, Madoff spoke to the FT from behind bars.

US pushes Japan to back Taiwan at Biden-Suga summit The US is urging Japan’s prime minister Yoshihide Suga to issue a joint statement of support for Taiwan amid rising Chinese aggression in the Indo-Pacific region when he becomes the first foreign leader to meet President Joe Biden on Friday.

Ex-officer who fatally shot Daunte Wright to face manslaughter charge Kim Potter, the former police officer who shot and killed a young black man in a Minneapolis suburb, was charged on Wednesday with second-degree manslaughter, a prosecutor said. She has been arrested and booked at the Hennepin County jail.

HSBC top staff relocate to HK Four of HSBC’s top executives are to relocate from London to Hong Kong as the bank continues to accelerate its strategic shift to Asia. The executive relocations mean that divisions which account for almost all of HSBC’s global revenue will be managed from Hong Kong.

US retail data Investors will find out on Thursday whether another round of stimulus payments that reached American households in March sent sales jumping again after they fell in February.

What else we’re reading

Investors brace for momentum and value to collide The strength of the recent rally in cheap stocks could trigger a rare shift in equity market dynamics that some investors expect will fuel the gains of financial and energy companies.

Private equity houses target Japan as Covid shadow extends The longer it takes the world’s third-biggest economy to bounce back to something close to normal, the faster will be the flood of deals for which the largest funds globally have long been camped-out in expectation, writes Leo Lewis.

Grab is lunging for the top of the Spac market Singapore’s superapp Grab announced it will use a special purpose acquisition company to float on Nasdaq just as the rest of the Spac market is deflating rapidly. There is trouble looming, writes Brooke Masters, and US regulators must do more.

How to make money in the music business The FT’s Don Newkirk asks some of the world’s biggest music companies, record labels, and producers how they are adapting to a fast-changing industry. And he follows an up-and-coming artist struggling to make his fair share during the pandemic, at a time when streaming dominates.

Video: How to make money in the music business | FT Film

China’s digital currency is a threat to dollar dominance The price of bitcoin and the emergence of cryptocurrency technology may be a sideshow for a big developing trend — the rapid digitalisation of the renminbi, writes Michael Hasenstab, chief investment officer for Templeton Global Macro. This shift could accelerate the decline of the dollar’s dominance.

The pitfalls of ‘working from anywhere’ Since Covid-19 forced a worldwide remote working experiment, staff have logged hours from home for weeks, months — even a year. Should governments and companies rethink how to ease work across borders? Overseas employees come with compliance headaches, including payroll taxes, benefits and social security.

Why it is so difficult to quit QAnon The online and interactive nature of fringe conspiracy theories such as QAnon make it hard to leave, former followers say. It gamifies the process of truth-seeking; everyone is invited to be an armchair sleuth, picking apart Q’s “drops” and spreading the word. For adherents, the process of deradicalisation can be painstaking. (FT)

Cartoon of the day

Thank you for reading. Send your recommendations and feedback to [email protected]

Some tech buy ideas for the dip. Analysts are getting more bullish on these growth stocks

Back to the future for the social market economy