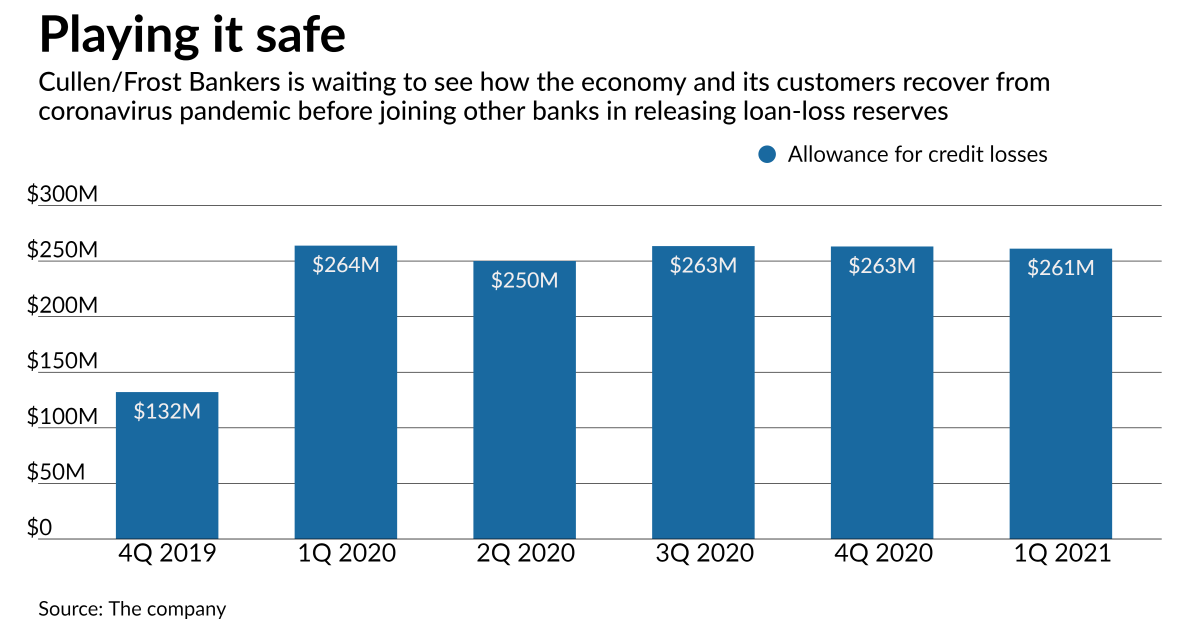 Cullen/Frost Bankers in San Antonio is bucking not one but two industry trends.

Many banks used massive reserve releases to boost their profits in the first quarter, but the $44 billion-asset company is still waiting to see how the COVID-19 pandemic shakes out before reducing its allowance for loan losses.

However, that caution isn’t getting in the way of making big plans as Cullen/Frost executives said Thursday they plan to open 25 additional branches in the Dallas market over the next 30 months. The brick-and-mortar expansion comes as the bank is nearly done rolling out 25 new branches in Houston.

This dedication to organic growth has all but eliminated any temptation to jump into a frenzy of M&A deals in the company’s home state and elsewhere, Chairman and CEO Phil Green said on a call with analysts.

“I don’t want to be spending a lot of shareholder money to throw the long ball and hope something good happens,” Green said.

Cullen/Frost reported $261.2 million in allowances in the first quarter, down less than 1% from both from the previous three months and from a year earlier when the COVID-19 pandemic took hold.

The company’s internal model called for a reserve release, Chief Financial Officer Jerry Salinas said on the call, but management overrode the decision because of worries about virus mutations and changes in commercial real estate. Salinas specifically said there were concerns about office space and if workers would come back in the same numbers.

“We continue to be concerned about what’s going on in certain industries,” Salinas said. “We just felt it was too early in the process to release reserves.”

The decision to hold steady was fairly well received as the company’s shares rose more than 3% on the day. Some analysts had expected Cullen/Frost would add up to $12 million in provisions to start the year, Keefe Bruyette and Woods said in a note to clients Thursday.

Meanwhile, many banks have been cutting branches given consumers’ accelerated adoption of digital channels while social-distancing. But Cullen/Frost says it’s moving forward with its branch expansion after its new offices in Houston exceeded deposit and loan targets and helped boost the bottom line.

Companywide assets grew about 30% organically year over year to $44 billion. The number of commercial banking clients rose 55% in the first quarter alone, and the number of consumer customers climbed 255%, Green said. Total deposits increased 29% over the same period to $35.4 billion.

The Houston expansion contributed heavily to that growth, the company said. It also benefited from a sizable migration of customers from JPMorgan Chase, Bank of America and Wells Fargo who cited issues over the Paycheck Protection Program as their reason for changing banks, Salinas said.

The company has more than 160 branches, predominately in San Antonio and Houston and scattered about north Texas.

Cullen/Frost has eight branches in Dallas with several more in smaller, neighboring cities, according to Federal Deposit Insurance Corp. data. The branch-expansion plan would quadruple its presence there, and executives are expecting to duplicate and possibly exceed the growth shown in Houston.

“I can imagine our Dallas cohorts would not let Houston outshine them,” Green said. “I’m so excited about doing it. I’m really looking forward to what it’s going to do for us.”

Some tech buy ideas for the dip. Analysts are getting more bullish on these growth stocks

Back to the future for the social market economy